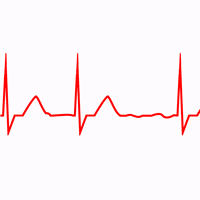 Atrial fibrillation (AF) is the most common sustained arrhythmia in clinical practice, with a prevalence in developed countries close to 2% of the general population.

Atrial fibrillation consists of the appearance of disorganized stimuli at atria, with rates from 350 to 600 bpm.

These high rates cause atrial stasis and the loss of atrial contraction, favouring atrial thrombus formation and thus increasing the risk of thromboembolisms.

The AV node decreases the number of impulses transmitted to the ventricles, producing a completely irregular ventricular stimulation with a ventricular heart rate inferior to the atrial one.

The main feature of the atrial fibrillation electrocardiogram is that it is completely arrhythmic.

It is considered the arrhythmia par excellence, as the RR intervals are irregular and follow no pattern.

Given a chaotic atrial stimuli there are no P waves, although small atrial waves called f waves - with various morphologies - can be observed.

The conduction to the ventricles will be through the normal conduction system, so the QRS complex will be narrow, except alterations, bundle branch block, or aberrant conduction (Ashman phenomenon).

As with everything related to this arrhythmia, heart rate in AF is very variable.

In patients with no antiarrhythmic treatment heart rate is frequently high, whereas with an adjusted treatment, AF usually presents heart rates within normal, or even lower.

When we observe AF with heart rate higher than 110 bpm it is usually in patients with no treatment, a non-optimized treatment, or due to decompensation related to other pathology (respiratory infection, anemia, hypoxemia).

In patients with permanent atrial fibrillation, it appears in the same circumstances as sinus tachycardia in normal patients.

It is usually observed in patients with over treatment. Also, atrioventricular vode dysfunction should be ruled out in the presence of AF with very slow HR (lower than 40 bpm or prolonged pauses).

When we find AF with slow ventricular response, with rhythmic QRS, on the electrocardiogram, atrial fibrillation with complete AV block and escape rhythm should be suspected.

From 2016 ESC Guidelines for the management of atrial fibrillation 1

Patients with permanent AF who a rhythm control strategy is adopted, the arrhythmia is redesignated as long-standing persistent atrial fibrillation.

Treatment for AF differs when we encounter an acute episode or when we want to establish a long term approach. It is based on three pillars in either case.

Patients with AF have a higher risk of suffering strokes caused by thromboembolism.

This risk is greater if accompanied by other risk factors suck as age, hypertension and diabetes mellitus, among others.

In every patient with AF, irrespective of whether the AF pattern is paroxysmal, persistent, or permanentrisk of stroke should be calculated in order to decide the necessity of anticoagulant therapy 1 3.

The CHA2DS2-VASc score is recommended for assessment of stroke risk within a year 3.

For patiente with atrial fibrillation and CHA2DS2-VASc score of 2 or greater in men or 3 or greater in women, oral anticoagulants are recommended, unless contraindicated 1 3.

Assess the patient’s stability, in order to decide whether urgent cardioversion or medical treatment is required.

Urgent electrical cardioversion will be performed on every patient with atrial fibrillation in the following situations if medical treatment fails to deliver a fast response:

IV heparin or low-molecular-weight heparin is recommended before or immediately after cardioversion 1 2.

With stable patients, assess if reversion of AF to sinus rhythm (with medication) or just heart rate control is needed.

Conversion to sinus rhythm is not indicated with: patients with AF lasting more than 48 hours without anticoagulants (risk of thromboembolism), known oersistent or permanent atrial fibrillation, elderly patients with mild symptoms, or severe sick sinus syndrome or atrioventricular blocks.

Heart rate control should be implemented in all patients, those for which pharmacological cardioversion is indicated included.

In AF long-term treatment, thromboembolism prevention is the most important objetive. Any AF patient with a CHA2DS2-VASc score of 2 or greater in men or 3 or greater in women must receive anticoagulant therapy indefinitely, unless contraindicated.

The goal of long-term treatment of atrial fibrillation is to control the associated symptoms. Sinus rhythm maintenance has not shown benefits over heart rate control.

Antiarrhythmic treatment in patients with paroxysmal atrial fibrillation seeks to avoid — or at least reduce — episodes of arrhythmia. However, these episodes increase over the years in frequency and duration.

In patients with permanent AF long-term treatment is based on heart rate control.

At present, the accepted target is to keep heart rate at rest below 110 bpm. Only in cases where the clinical manifestations persist should an stricter control be pursued (below 80 bpm).

In case of persistent symptoms despite strict heart rate control, conversion of atrial fibrillation to sinus rhythm by electrical cardioversion should be considered, ensuring at least 4 to 6 weeks of anticoagulation treatment prior to the procedure.

Catheter ablation of atrial fibrillation is an invasive technique to treat AF. It is the treatment that offers the better outcome for long-term sinus rhythm maintenance, although late recurrence may occur.

Patients with AF may also present with other types of arrhythmias. For example, a complete AV block, conduction through an accessory pathway of AF stimuli in Wolff-Parkinson-White syndrome or as bradycardia-tachycardia syndrome.

It is important to know the characteristics of atrial fibrillation combined with other rhythm disturbances.

Absence of P waves or presence of f waves with rhythmic QRS complexes accompanied by significant bradycardia. The QRS morphology depends on the location of the ectopic focus that produces the escape rhythm.

When AF is conducted mainly via the accessory pathway in patients with Wolff-Parkinson-White syndrome, a wide QRS complex tachycardia occurs whose main characteristic is wide and arrhythmic QRS complexes.

It is a medical emergency and will require an urgent electrical cardioversion.

The AF may appear in the context of an sick sinus syndrome after significant sinus pauses. It is usually self-limited and followed by another prolonged sinus pause.

This finding is known as bradycardia-tachycardia syndrome and it is suggestive of sick sinus syndrome.