The International Society for Nomenclature of Paediatric and Congenital Heart Disease (ISNPCHD) has defined an interatrial communication as a congenital cardiac malformation in which there is a hole or pathway between the atrial chambers 1.

Atrial septal defect is classified according to the area of the septum in which it is located. In general, its anatomical forms are:

Normally, these cardiopathies do not show signs of clinical relevance until the child is over 3 or 4 years old.

The electrocardiogram presents the same findings in the ostium secundum and venous sinus forms.

The left to right shunt that occurs at the atrial level causes volume overload of the right atrium and the right ventricle, as well as increased pulmonary flow; this is observed with high P waves in all leads of the EKG except aVR.

The electrocardiogram usually has a right axis deviation.

The Cabrera and Monroy overload criteria are clearly applied in these two forms of atrial septal defect. In these cases, diastolic overload of the right ventricle is expressed by a right bundle branch block pattern with negative T waves in leads V1 and V2.

The ostium primum is a defect in the atrial area of the atrioventricular septum. That is, the antero-inferior zone of the atrial septum.

This defect does not have great differences in its clinical picture with the other ASDs, but it has electrocardiographic characteristics that may facilitate its diagnosis. 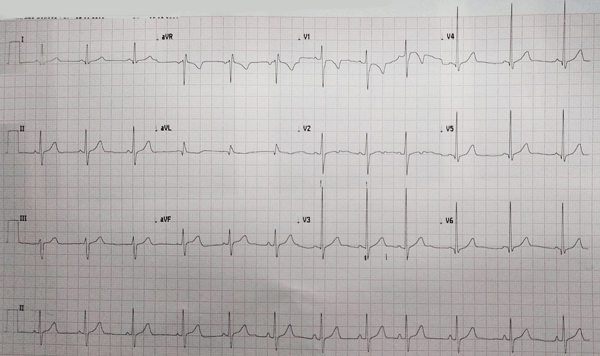 It is most often associated with cleft of the mitral septal leaflet, so it may be accompanied by varying degrees of mitral regurgitation.

This defect frequently causes displacement of the sonduction system, resulting in a left axis deviation.

Clinical suspicion of ASD with left axis deviation will allow us to make the diagnosis of this defect.