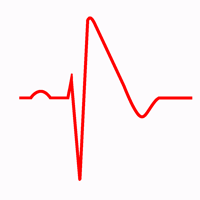 The Brugada syndrome is a relatively new clinical entity, which was first described in 1992 by brothers Pedro and Josep Brugada 1.

The Brugada syndrome is an autosomic dominant genetic disease. It is characterized by ST segment elevation in the right precordial leads (V1-V2) and a high incidence of sudden death in patients with structurally normal heart due to ventricular arrhythmias 2.

The incidence of this disease is on the order of 5 per 10,000 inhabitants and it thought to be responsible for at least 20% of deaths in patients with structurally normal hearts 2.

Electrocardiographic Characteristics of the Brugada Syndrome

Three types of EKG patterns are recognized in patients with Brugada syndrome, different patterns may be observed in the same patient. Type 1 is the only EKG diagnostic pattern of Brugada syndrome.

This pattern was described by Brugada brothers in 1992, it is characterized by a prominent coved ST segment or J point elevation ≥2 mm (0.2 mV) followed by a negative T wave in at least one right precordial lead (V1 or V2), which are placed in a standard or a superior position.

It has a "saddleback" appearance.

This pattern is similar to type 2 EKG, it has either a saddleback or coved appearance, but with an ST-segment elevation <1 mm.

In patients with Brugada syndrome, the morphology of ST segment elevation varies considerably day by day. The three patterns may be observed sequentially in the same patient.

To increase diagnostic sensitivity, in 2013 the HRS/EHRA/APHRS Expert Consensus omits any clinical criterion and demands diagnostic EKG changes in only one right precordial lead 3.

From: HRS/EHRA/APHRS Expert Consensus Statement on the Diagnosis and Management of Patients with Inherited Primary Arrhythmia Syndromes 3.

With the clinical diagnostic criterion no longer being used, risk stratification plays a critical role to identify patients with high risk of sudden cardiac death 4.

Since Brugada syndrome was described 1, several clinical variables have been identified to predict a worse prognosis.

But only sudden cardiac arrest and syncope with a spontaneous type 1 EKG have consistently been associated with a high risk of cardiac arrhythmic events at follow-up 3 5.

The prognostic value of inducibility during electrophysiology study has been debated and most clinical studies have not confirmed either a positive or a negative predictive value for the occurrence of cardiac events at follow-up 4 5.

A positive family history of sudden death has not proven to be a risk marker in any of the large studies.

As different patterns may be observed in the same patient with Brugada syndrome, in patients with type 2 or 3 EKG pattern, Ic antiarrhythmic drugs should be given to unmask type I EKG.

Ajmaline (1mg/kg in 5 min IV) and flecainide (2mg/kg in 10 min IV or 400 mg oral), are the agents most widely employed. Ajmaline has demonstrated higher specificity and sensitivity 6.

The following lifestyle changes are recommended in all patients with a diagnosis of Brugada syndrome:

Quinidine has been proposed as preventive therapy in patients with Brugada syndrome, based on data showing that it reduces ventricular fibrillation inducibility during programmed ventricular stimulation; however, there are no data confirming its ability to reduce the risk of sudden cardiac death.

According to the ESC Guidelines 5, quinidine or isoproterenol should be considered in patients with Brugada syndrome to treat electrical storms.

The only treatment able to reduce the risk of sudden cardiac death in Brugada syndrome is the Implantable cardioverter defibrillator (ICD).

According to the ESC Guidelines for the management of patients with ventricular arrhythmias and the prevention of sudden cardiac death 2015 5:

Recently it has been suggested that epicardial catheter ablation over the anterior RVOT may prevent electrical storms in patients with recurring episodes, but the data require confirmation before entering general clinical practice.

Therefore, vatheter ablation may be considered in patients with a history of electrical storms or repeated appropriate ICD shocks 5.