Pregnancy affects all the functions of the maternal body and brings about remarkable changes in the cardiovascular system.

It may also cause changes in the electrocardiogram which can be confused with certain heart diseases 1.

Pregnancy may cause a progressive increase of the heart rate, left-axis deviation, negative T waves in some leads and a prolongation of the QTc interval 2 3.

Cardiovascular and EKG changes during pregnancy

Pregnancy is associated with important cardiovascular adaptations, including increases in heart rate and blood volume, resulting in increased cardiac output throughout pregnancy and in decreased systemic vascular resistance in the first half of pregnancy with subsequent attenuation in the last trimester. 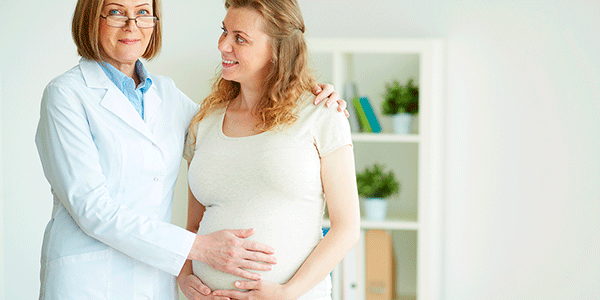 The increase in heart rate mainly during third trimester of pregnancy compensates for the fall in the stroke volume resulting from caval compression 2.

The PR interval may be shorter at third trimester when compared to first and second trimesters of pregnancy.

This decrease in PR interval could be due to shortening of AV conductance and the resultant tachycardia that accompanies pregnancy 2.

There is no significant change in QRS amplitude or duration during pregnancy.

In pregnant women, the QRS axis is deviated to the left in the third trimester. This change in electrical axis is attributed to the raising of diaphragm as pregnancy advances.

T wave inversion in lead III and in V2 appears more frequent in the pregnant women than in non pregnant.

This is attributable to the increased work load on heart due to temporary increased blood volume during pregnancy which may cause a temporary ischemia, represented on the EKG by T wave inversion.

Presence of Q wave in leads III and aVF is significant in second and third trimesters of pregnancy when compared to first trimester and non pregnant women. It may be due to altered position of the heart.

These changes may be either due to an increase in the circulating vasopressor agents or may reflect diaphragmatic changes that have been associated with pregnancy.

During pregnancy, it may be a significant increase in QTc interval in the second and third trimesters.

This must be considered as a complex consequence of changes in the various regulatory mechanisms occurring during normal pregnancy.

Leftward shift of the QRS axis, shortening of PR interval, T wave inversion in leads III and V2, prominent Q waves in lead III and aVF, and prolonged QTc interval, may be observed in pregnant women.

The interpretation of EKG during the antenatal period should be done with caution. These changes should be considered normal unless associated with significant symptoms.