Bundle branch blocks are disorders of electrical conduction distal to the bifurcation of the His bundle, causing changes in the depolarization of the ventricles.

Anatomy of the Bundle Branch Blocks 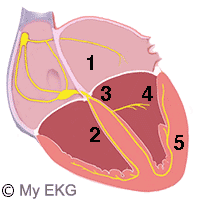 The bundle of His divides into two branches:

Any disturbance in one of these three branches causes conduction disorder and electrocardiographic abnormalities.

A complete bundle branch block occurs when there is a complete obstruction of the impulses in the right branch or left branch before the subdivision.

On the electrocardiogram, the main characteristic of a complete bundle branch block is the QRS widening (greater than 0.12 s).

This increases the time of ventricular depolarization and therefore a widening of the QRS complex.

The fascicular blocks occur when the interruption of the impulse is in one of the fascicles of the left bundle branch.

These blocks do not increase the time of ventricular depolarization. So the QRS complex is narrow.

Its main feature in the electrocardiogram is an important axis deviation.

In incomplete bundle branch blocks, there is no interruption of the stimulus. The impulse is conducted by both branches, but more slowly through the affected branch.

On the electrocardiogram, they are observed with minimal widening of the QRS (between 0.1 s and 0.12 s) and morphological changes similar to bomplete bundle branch blocks.

Incomplete right bundle branch block is defined by QRS duration between 110 and 120 ms in adults. Other criteria are the same as for complete RBBB.

In both Incomplete bundle branch blocks could be ST segment or T wave abnormalities.

Disturbance of the Intraventricular Conduction