The complete right bundle branch block (RBBB) occurs when the right branch is not able to conduct the electrical stimulus. Therefore, the depolarization of both ventricles is performed by the left branch.

The electrical stimulus travels down the left branch. First depolarized the left ventricle and the left two-thirds of the septum. Then, with delay, the regions of the right branch are depolarized.

This delay in depolarization causes a widening of the QRS complex. 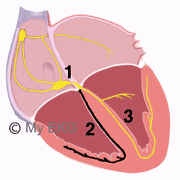 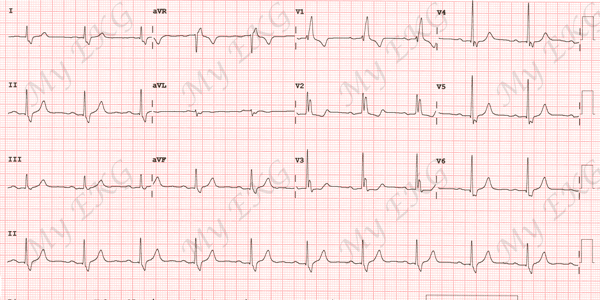 Of the above criteria, the first 3 should be present to make the diagnosis. When a pure dominant R wave with or without a notch is present in lead V1, criterion 4 should be satisfied.

After, the depolarization spreads to both ventricles, with a predominance of the left ventricle, producing a deep S wave in V1 and a tall R wave in V6.

In right bundle branch block, the beginning of depolarization is similar. Disturbances occur at the end of QRS.

The beginning of the QRS complex is equal to normal, (rS in V1 and qR in V6). But instead of ending, delayed right ventricular depolarization occurs, producing at the end of the QRS, a new R wave (R’) in V1 and a wide S wave in V6.

Tip: In right bundle branch block, ST-segment and T wave are deflected opposite the majority of the QRS complex (appropriate T wave discordance).

The main causes of right bundle branch block are: