Hypercalcemia on the Electrocardiogram 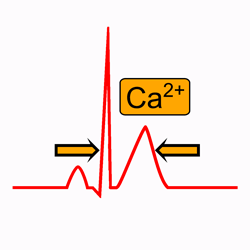 Hypercalcemia is defined as an increase in the serum calcium level in the plasma higher than 10.4 mg/dL (2.60 mmol/L or 5.2 mEq/L).

About 50% of the total calcium in the plasma exists in the ionized form, which is the form that has biological activity at cell membranes.

The remainder is either bound to the plasma proteins (about 40%) or complexed in the non-ionized form with anions such as phosphate and citrate (about 10%) 1.

In hypercalcemia, the ST segment is short or absent and the duration of the corrected QT interval (QTc) is decreased 2.

The QTc interval is inversely proportional to the serum calcium level up to 16 mg/dL(4 mmol/L) 3.

With marked hypercalcemia, the T wave appears to take off right from the end of the QRS complex 4.

No changes in the QRS and PR durations have been reported.

Hypercalcemia usually does not alter the morphology of the P waves or T waves, but a slight, statistically significant increase in T wave duration was reported.

The U wave amplitude is either normal or increased.

In the presence of hypercalcemia associated with hypokalemia, a short QT interval with increased U wave amplitude results in a distinct pattern, most often seen in patients with multiple myeloma.

Arrhythmias are uncommon in patients with hypercalcemia. However, sudden death during hyperparathyroid crisis and other conditions associated with severe hypercalcemia may be caused by ventricular fibrillation 2.

Second or third degree AV blocks have been also reported in patients with severe hypercalcemia 2.

Treatment of hypercalcemia depends on the severity of symptoms and the underlying cause.

Asymptomatic or mildly symptomatic patients with mild or chronic moderate hypercalcemia may not require immediate treatment 5.

Patients with asymptomatic or mildly symptomatic hypercalcemia do not require immediate treatment. Adequate hydration (at least 1.5 to 2 liters of water per day) is recommended.

However, they should be advised to avoid factors that can aggravate hypercalcemia, including thiazide diuretics and lithium carbonate therapy, volume depletion, prolonged bed rest, and a high calcium diet.

However, an acute rise to these levels may cause gastrointestinal side effects and changes in sensorium, which requires treatment as described for severe hypercalcemia 5.

Patients with severe hypercalcemia are dehydrated by default and require saline hydration as initial therapy 6.

For immediate short-term management of severe hypercalcemia who are also symptomatic, administration of calcitonin should be considered 5 6.

Glucocorticoids are effective in treating hypercalcemia due to some lymphomas, sarcoid, or other granulomatous diseases.

Dialysis is considered treatments of last resort. It may be indicated in patients with severe malignancy-associated hypercalcemia and renal insufficiency or heart failure, in whom hydration cannot be safely administered.

Patients with hypercalcemia typically have a shortened ST segment and a shortened QT interval on the electrocardiogram.

The QTc interval usually is inversely proportional to the serum calcium level, and with marked hypercalcemia, the T wave appears to take off right from the end of the QRS complex.