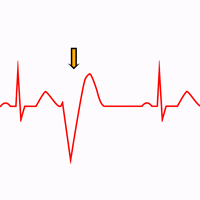 Premature ventricular complexes are the most common arrhythmia observed in patients without structural heart disease 1.

PVCs are characterized by the premature occurrence of a wide QRS complex that is bizarre in shape.

The wide QRS complex is accompanied by secondary ST segment and T wave changes and a full compensatory pause.

Premature ventricular complexes reflect activation of the ventricles from a site below the AV node.

Initiation of PVCs is dependent on the underlying condition and can be explained by reentry, enhanced automaticity or triggered activity.

Enhanced automaticity suggests an ectopic focus of pacemaker cells in the ventricle. This process is the underlying mechanism for arrhythmias due to catecholamines or hyperkalemia.

Reentry occurs in patients with underlying heart disease due to myocardial scarring or ischemia. It can produce single ectopic beats, or it can trigger paroxysmal tachycardia.

PVCs caused by triggered activity are often seen in patients with ventricular arrhythmias due to digoxin toxicity and reperfusion therapy after an acute myocardial infarction.

The mechanism of PVCs in patients without structural heart disease is thought to be enhanced automaticity versus triggered activity.

Premature Ventricular Complexes on the Electrocardiogram

Premature Ventricular Complex:
PVC marked by the arrow on an EKG in sinus rhythm. The compensatory pause is marked in blue.

When the major QRS deflection is upright, the ST-segment is depressed and the T wave inverted.

When the major QRS deflection is negative, the ST-segment is elevated and the T wave upright 2.

Premature ventricular complexes are typically followed by a compensatory pause. That means that the cycle length after the PVC is longer than the basic cycle.

If the basic rhythm is sinus in origin, there is usually a full compensatory pause, the sum of the R-R intervals that precede and follow the ectopic complex is equal to the sum of two R-R intervals of the sinus rhythm.

The full compensatory pause occurs because the sinus rhythmicity is undisturbed by the ectopic impulse (unlike with premature atrial complexes).

The frequency of the ectopic beats varies widely not only among individuals, but also in the same subject at different periods of observation.

Classification according number of foci:

Classification according to frequency:

Classification according to pattern of presentation

The QRS morphology on EKG can predict the PVCs site of origin.

The right or left ventricular outflow tracts and aortic cusp are the most common sites of origin for PVC in the absence of structural heart disease.

PVCs originating from epicardial sites have a pseudo-delta wave, with slurring of the initial part of the QRS complex and delayed intrinsicoid deflection in the precordial leads 3.

Fascicular PVCs: RBBB morphology with either an anterior or posterior hemiblock pattern. Fascicular PVCs have a relatively narrow QRS 3 4.

It occurs mostly when the sinus rate is slow and the PVC is early.

Fusion beats or fusion complexes occur when a supraventricular impulse reaches the ventricles during a ventricular beat and they coincide to produce a hybrid complex.

The R-on-T phenomenon describes ventricular depolarization which is superimposed on the T wave of the preceding beat.

Long QT intervals predispose the patient to an R-on-T phenomenon, which can initiate a episodes of torsades de pointes.

Assessment and treatment of PVCs is challenging and complex, and is highly dependent on the clinical context.

The prognostic significance of PVCs is variable and, again, best interpreted in the context of the underlying cardiac condition.

Beta-blockers are the mainstay of medical suppression of PVCs.

Verapamil and diltiazem are highly effective in treating fascicular PVCs.

Amiodarone is very effective in suppressing PVCs but has considerable short-term and long-term side effects.

In addition to an excellent safety profile, ablation has been associated with reversal of ventricular dysfunction, but is typically reserved for drug-intolerant or medically refractory patients with a high PVC burden 4.

According to the 2017 AHA/ACC/HRS Guideline, PVC ablation is reasonable (Class I) for symptomatic PVCs or declining ventricular function suspected to be due to frequent PVCs, when drug therapy is ineffective, not tolerated, or not preferred by the patient.