EKG Localization of the Occluded Artery in Acute Myocardial Infarction 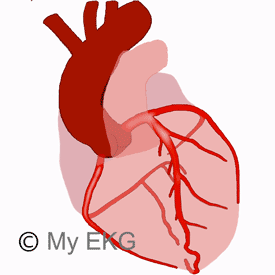 The ST-segment elevation myocardial infarction (STEMI) is caused, in most of the cases, by the acute total or subtotal occlusion of a coronary artery.

This occlusion causes immediate changes in the electrocardiogram which allow a rapid diagnosis of STEMI.

In addition, depending on EKG leads affected we can determine, with a level of certainty quite high, which artery is occluded and even at which level the occlusion has occurred.

The occlusion of a coronary artery causes a situation of ischemia in the myocardium irrigated by this artery which, if not corrected, will start to suffer myocardial damage and subsequently necrosis.

The main alteration of the EKG during a coronary occlusion is the ST-segment elevation in more than two contiguous leads.

This ST segment elevation will be seen in the leads closer to the wall of the affected myocardium, which allows us to classify the STEMI according to location (bottom, anterior, lateral, etc…).

How to Know what Artery is Occluded with the Electrocardiogram

Depending on the leads with ST segment elevation we can determine which coronary artery is occluded.

To do this, let's take a look at the walls of the heart that irrigates each coronary artery.

Correlation between the Walls of the Heart and Coronary Arteries

The coronary anatomy is different for each person. The correlation that is described is a generality and not a rule.

With these data it is easy to determine which artery is causing an anterior, septal or lateral myocardial infarction.

The main question is whether the artery causing inferior myocardial infarction is the right coronary artery or the circumflex artery.

How to Determine the Culprit Artery in an Inferior Myocardial Infarction

During an acute inferior myocardial infarction there is a ST elevation in inferior leads (II, III and aVF). It is also accompanied by reciprocal changes in other leads, particularly in anterior leads (V2-V3) 1.

The inferior wall is irrigated by the posterior interventricular artery, which may be a branch of the right coronary artery (85%) or of the circumflex artery (15%).

How do you know which of the two arteries is the culprit of the inferior infarction?

There is data of the electrocardiogram that allows us to determine which artery is occluded.

Assess ST Segment in Lead I

Remember that the circumflex artery supplies blood to the lateral wall also through the obtuse marginal arteries.

On the contrary, if there is a reciprocal ST depression in lead I, it is very likely that the occlusion is in the right coronary artery.

If the ST segment is normal in lead I, you have to go to the next step:

Compare the ST Segment in Leads II and III

The next step is to compare the height of the ST elevation in leads II and III.

If in lead III the ST segment elevation is higher than in lead II, it is more likely that the occlusion is in right coronary artery.

If the ST elevation in lead II is higher than in lead III, it is more likely that the occlusion is in the circumflex artery 2.

ST elevation in the inferior leads:

With the electrocardiogram, we could also suppose at what level of the left anterior descending artery the occlusion has occurred.

Left anterior descending artery has different branches: septal and diagonals branches (read coronary arteries). The order of these branches is different in each patient, a diagonal artery may arise first and after a septal artery, or vice versa.

Depending on the level of the left anterior descending coronary artery where the occlusion occurs, and whether it is before or after the septal or diagonal arteries, there will be different patterns in the electrocardiogram.

The occlusion of the mid or distal left anterior descending artery (distal to the diagonal and septal branches) affects the apex and the distal segments of the left ventricle.

This occlusion produces ST-segment elevation in the anterior leads (V2, V3 and V4) and in some cases, it may also be ST elevation in V5 and V6 because there may be injury of the distal lateral wall.

There is no ST-segment elevation in lead aVR or in lead V1 1.

If the occlusion occurs prior to the start of the first diagonal artery, but distal to the first septal artery, ischemia occurs in the anterior and lateral walls of the left ventricle.

The EKG shows a ST-segment elevation anterolateral leads (V2 to V6, I and aVL).

In addition, it is usually accompanied by a reciprocal ST depression in inferior leads, especially in lead III.

If the occlusion occurs prior to the first septal artery and distal to the first diagonal artery, the ischemia occurs mainly in the anterior and septal walls of the left ventricle.

In the EKG, it generates ST-segment elevation in the anteroseptal leads (V1-V4), it can also be seen ST elevation in lead aVR.

The lateral wall is usually respected, so in leads V5, V6, and aVL a reciprocal ST depression may be observed 1.

A proximal occlusion of the left anterior descending artery (prior to the first diagonal artery and to the first septal artery) causes a large area of ischemia, affecting the entire anterior wall, the septum and lateral wall.

This is observed in the electrocardiogram with ST-segment elevation in all precordial leads (septal, anterior and lateral leads) from V1 to V6 and even aVL.

The proximal occlusion of the LAD is often accompany with reciprocal ST depression in inferior leads 1.

This is an EKG sign of poor prognosis, means a large area of ischemia, with severe left ventricular dysfunction and high risk of complications and death.

The most frequent cause of this alteration is a left anterior descending artery longer than usual (recurrent LAD), which exceeds the apex and continues through the distal third of the inferior wall.

Therefore, an occlusion of the recurrent left anterior descending artery causes ischemia in the anterior wall and, at the same time, in the inferior wall, causing ST-segment elevation in both lead groups.