Left Atrial Enlargement on the Electrocardiogram 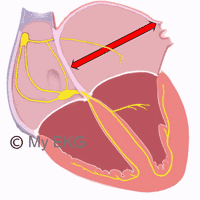 The passage of the electrical stimulus through the atria is reflected in the electrocardiogram as the P wave.

This difference is more striking in the lead V1 where the P wave has a biphasic morphology, with a first positive component (right atrium) and a second negative component (left atrium) 1.

Left Atrial Enlargement on the EKG

As it is to be supposed, the dilation of the Left Atrium produces, in most cases, changes in the P wave, especially in its final component.

As the left atrium depolarizes after the right atrium, an enlargement thereof will cause a longer duration of the depolarization time and therefore a widening of the P wave, greater than 0.12 s.

In addition, in lead V1, the depth of the negative final component is greater than the height of the initial part.

Summarizing: The most striking sign of the left atrial enlargement is a wide P wave, greater than 0.12 s or 3 small squares, with a predominance of the negative final component in lead V1.

It is important to note that in patients with ischemic heart disease, wide P waves with a left atrium of normal dimensions can be observed, probably due to a delay of the atrial conduction.

Aging itself causes left atrial growth, probably in relation to structural changes in the atrial tissue.

Obesity has also been related to left atrial enlargement, although the mechanism is not very clear 2.

Alterations of the mitral valve are the classic causes of left atrial enlargement, both mitral stenosis due to increased pressure, and mitral insufficiency due to volume increase.

The interatrial block pattern presents a P wave widening that is frequently bimodal, which often leads to interpretation as left atrial enlargement, but these two electrocardiographic patterns are two different entities 5.

In these cases, it is the morphology of the P wave in lead V1 that allows us to determine if there is a left atrial enlargement associated with interatrial block.

The presence of a negative final component of the P wave in lead V1 greater than 40 ms may indicate left atrial enlargement 5.

In any case, the association between interatrial block and left atrial enlargement is relatively frequent. In fact, it has been considered that the bimodal P wave is better explained because of underlying interatrial block than the longer distance that the impulse has to go across 6.