We are grateful to Dr. Bayés de Luna for his suggestions and comments about this article.

The mechanisms involved in the spread of stimuli from the sinus node across the atria are still today, somewhat controversial. It is generally accepted that are conducted through the right atrium to the AV node by a preferential pathways.

In 1979 Bayés de Luna described atrial conduction blocks and classified them as inter- and intra-atrial. Interatrial block refer to conduction disorders located between the atria, whereas intra-atrial blocks occur within the same atrium 1.

Interatrial block is the most frequent and relevant blocks at the atrial level and it mean that exist a conduction disorder between the right and left atrium 2.

The conduction disorder may be located in any part of the atria, however in the case of advanced interatrial block involves, especially the upper part of the interatrial zone around the Bachmann's bundle 2.

Interatrial block is often found in the elderly in the absence of associated left atrial enlargement. Recently, it has been shown to be a marker of atrial fibrillation 1.

Bayés et al. defined interatrial block as a conduction delay between the atria in the zone of Bachmann’s bundle, with P wave duration ≥120 ms.

In partial interatrial block the electrical impulse is conducted from the rigth atrium to left atrium through the normal propagation route but with a delay at the Bachmann's bundle region 1.

Sometimes, the initial positive component of the P wave on inferior leads may be very small mimicking a completely negative P wave, suggesting a junctional rhythm. However, the P wave is sinus because the positive polarity in the other leads especially V5-V6, confirms the sinus origin. 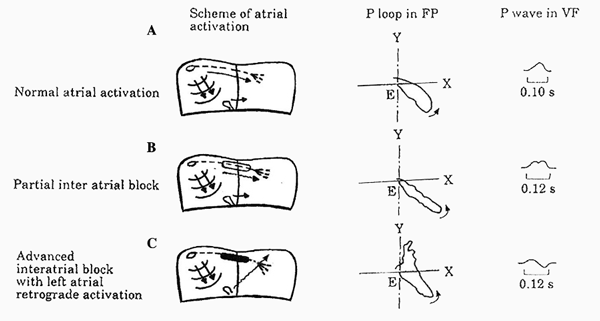 A P wave with a negative final component in lead aVF is required to diagnose advaced interatrial block (previous image), because left atrium has a retrograde activation.

Similarly to the AV blocks or sinoatrial blocks, interatrial block may occur transiently on a beat-to-beat basis.

Bayés’ Syndrome: Interatrial Block as a predictor of Supraventricular Arrhythmias

The presence of third degree interatrial block has been associated with supraventricular arrhythmias, such as premature atrial complexes, atrial flutter, but especially atrial fibrillation 3 4.

This association between advanced interatrial block and supraventricular arrhythmias constitutes for some authors a clear arrhythmological syndrome 1 3.

In 2014 Conde and Baranchuk 5 proposed to call it “Bayés Syndrome” in recognition of the first person to describe all aspects associated with this condition.

Interatrial block pattern are not described in most of EKG books and prolonged P wave duration (wide P wave) is often interpreted as lef atrial enlargement 3 4, but these two electrocardiographic patterns are two different entities 3.

Moreover, advanced interatrial blocks is commonly present in the setting of left atrial enlargement, it is a very specific (90%) but insensitive marker of this pathology 1 3.