Digoxin on the Electrocardiogram 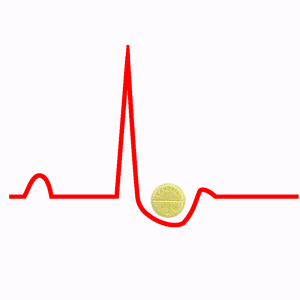 Digoxin is the oldest drug in cardiovascular medicine that is used in current clinical practice 1.

The use of digitalis generates changes in the electrocardiogram at therapeutic doses, especially at the level of the ST segment and the T wave.

It also decreases heart rate, and in the case of toxicity, it can generate a great variety of arrhythmias.

Currently, the main indication for the use of digoxin is the control of heart rate in patients with atrial fibrillation and heart failure 3 4 5. It can also be used in patients in sinus rhythm with symptomatic heart failure and ejection fraction ≤40% 5.

Digoxin inhibits the sodium-potassium ATPase pump, causing increased vagal tone and intracellular calcium accumulation. This causes an increase in myocardial contractility and vagal depression of the sinus and atrioventricular nodes 2.

Digoxin can cause atrial and ventricular arrhythmias, especially in the context of hypokalemia, which is why it is mandatory to perform a serial monitoring of serum electrolytes and renal function.

At therapeutic levels, digoxin can cause effects on the electrocardiogram, which must be differentiated from digoxin toxicity (see below).

The optimal serum concentration of digoxin is 0.5 ng/ml to 1.0 ng/ml. Given the low therapeutic range, your serum levels should be monitored periodically 6.

Treatment with digoxin can generate changes in the electrocardiogram due to its effects on the myocardial cells and on the cardiac conduction system.

Its main alterations are at the level of the ST segment and the T wave, although it also produces shortening of the QT interval and prolongation of the PR interval.

Changes in the EKG due to digoxin:

The classic electrocardiographic sign of digoxin treatment is the so-called “reverse tick” sign which is no more than the ST segment depression in a concave shape.

It also has received other names like “hockey stick”, or “Salvador Dalí's mustache”, because it has a similar shape. 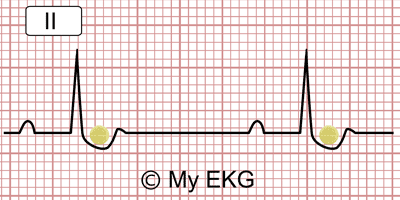 Salvador Dali sagging sign
The depression of the ST segment makes one think of the mustache of the famous painter.

Digoxin has a narrow therapeutic range, which means that the toxic dose is very close to the therapeutic dose.

So digoxin toxicity is a frequent problem in addition to being a serious and potentially lethal one.

When high serum levels of digoxin are detected in the absence of symptoms, whether the analytical test was performed within 6 hours of the last dose of digoxin must be verified, as that may be the cause of high analytical values.

If the data are correct, treatment with digoxin should be discontinued and hypokalemia and hypomagnesemia should be corrected if they were present. Administration of intravenous calcium is contraindicated because it could cause lethal arrhythmias.

Treatment with drugs that increase digoxin concentrations or that potentiate their effects should also be suspended.

Patients who present severe hyperkalemia secondary to digoxin toxicity should be dialyzed.

Digoxin generates variations in the electrocardiogram at therapeutic doses, the best known being the "reverse tick sign",although it also causes T wave changes, shortening of the QT interval and prolongation of the PR interval.

The therapeutic range of digoxin is very narrow so digoxin toxicity is a frequent and potentially lethal complication.

Digoxin toxicity can generate a wide variety of arrhythmias. It can present severe bradyarrhythmias as well such as ventricular tachycardias or atrial fibrillation.

Its treatment involves the suspension of medications, correction of associated electrolyte disorders and, in severe cases, the administration of anti-digoxin immunotherapy and dialysis.

We hope that this article about digoxin on the electrocardiogram has been useful for you. You can keep checking out some of our other articles.