The International Society for Nomenclature of Paediatric and Congenital Heart Disease (ISNPCHD) has defined a ventricular septal defect (VSD) as a congenital cardiac malformation in which there is a hole or pathway between the ventricular chambers 1.

Ventricular septal defect is the most common congenital heart disease if the bicuspid aortic valve is excluded 2.

This defect may be single or multiple and of varying size and shape.

It may also be associated with other cardiac anomalies such as tetralogy of Fallot, persistent truncus arteriosus, transposition of the great vessels or the common atrioventricular canal, or may also occur in isolation.

Perimembranous central defects are the most frequent VSD, between 75% and 80% of them.

They are located in the space usually occupied by the interventricular part of the membranous septum, at the anteroseptal commissure behind the septal leaflet of the tricuspid valve and below the commissure between the right and noncoronary leaflets of the aortic valve 3.

Inlet defects represent 5% to 8% of all VSD. They open into the right ventricle inlet and extend along the septal leaflet of the tricuspid valve.

They are located below the medial papillary muscle, postero-inferior limb of the septal band, and anteroseptal commissure of the tricuspid valve.

Outlet defects represent 5% to 7% of all VSD, although this incidence is increasing in the Asian population where it can reach 30%.

Outlet defects open into the right ventricle outlet between the limbs of the septal band, just below the pulmonary valve 3.

The extra blood supply to the right ventricle from the left ventricle causes increased lung flow, which results in left atrial enlargement and left ventricular hypertrophy.

The electrocardiogram varies depending on the impact of the defect. It may be normal in small defects or show signs of left atrial and left ventricular enlargement according to the magnitude of the shunt due to volume overload of these chambers.

As pulmonary resistances increase in response to pulmonary hyper-flow, the right ventricle will also develops hypertrophy.

In this article we will only describe changes in the EKG when the VSD is not associated with other cardiac malformation.

Left atrial enlargement and left ventricular hypertrophy are usually the most frequent alteration, this is due to the overloading of left chambers due to pulmonary overcirculation 4.

Moderate or severe defects may cause right ventricular hypertrophy, especially if there is an increase in pressure in the right ventricle. 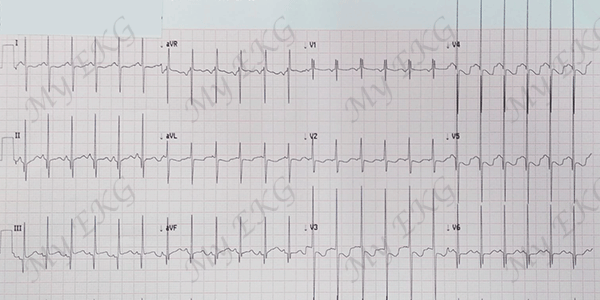 Patients with a severe interventricular septal defect often have electrocardiographic signs of biventricular hypertrophy, with high QRS and diphasic complexes in the midprecordial leads (V2, V3 and V4), alterations also known as Katz-Wachtel phenomenon or sign.

The presence of biphasic QRS complexes with high amplitudes (≥50 mm) in the midprecordial leads (from V2 to V3 or to V4) is highly suggestive of biventricular hypertrophy and is characteristic of ventricular septal defect 6.