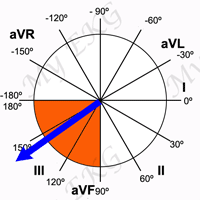 The situations in which right-axis deviation may be seen are as follows:

Right-axis deviation occurs normally in infants and children 3 (read pediatric EKG). At birth, the mean QRS axis lies between 60° and 160°. By age 1 year, the axis changes gradually to lie between 10° and 100° 4.

In the adult population, tall and slender subjects tend to have a rightward QRS axis 3.

Reversal of the arm leads is the most common lead placement error.

It is the easiest to recognize because of a negative P wave in lead I in patients with sinus rhythm, which is unusual even in the presence of heart disease 3.

When the left and right arm leads are reversed, the EKG reveals the following changes:

In patients with atrial fibrillation or unidentifiable P waves, the morphology of the ventricular complexes in leads I, V5, and V6 should be similar.

If the polarity of the QRS complex in lead I is opposite that in the left precordial leads, arm lead reversal should be suspected 3.

In left posterior fascicular block there is a delay in the activation of the posterior region of the left ventricle, which produces a marked right-axis deviation (120º or more), without widening of QRS complex.

Right ventricular hypertrophy (RVH) causes a displacement of the QRS vector toward the right and anteriorly and often causes a delay in the R wave peak in right precordial leads 5.

Electrocardiographic RVH has often been classified on the basis of two EKG patterns 3 5:

Both patterns are associated with right-axis deviation.

In patients with lateral myocardial infarction, the loss of leftward forces may result in a rightward shift of the QRS vector.

In these patients the initial R wave in lead I is usually absent, however, and abnormal Q waves are often observed also in the left precordial leads.

Inverted T waves in leads I, aVL, V5, and V6 may also be present in patients with lateral myocardial infarction.

The characteristic EKG pattern in patients with chronic obstructive pulmonary disease (COPD) is attributed to changes in the spatial orientation of the heart, the insulating effect of the overaerated lungs, and the low position of the diaphragm.

Typical EKG changes of COPD include peaked P waves in inferior leads (II, III, and aVF), persistent S waves in all precordial leads, low R wave amplitude in all leads, and a frontal plane QRS axis that is rightward, superior, or indeterminate.

Other Causes of Right Axis Deviation

Abnormalities of axis are rarely specific in the diagnosis of congenital heart diseases. Tetralogy of Fallot, transposition of the great arteries, total anomalous pulmonary venous return, ventricular and atrial septal defect may causes cause right-axis deviation 6.

Right-axis deviation may also be seen in high degrees of pre-excitation or during a ventricular tachycardia.