ARVC is an inherited condition which may lead to ventricular dysfunction, ventricular arrhythmias and sudden cardiac death. It is a major cause of sudden death in young individuals and athletes 1 2.

The estimated prevalence of arrhythmogenic right ventricular cardiomyopathy in the general population ranges from 1:2000 to 1:5000 and it affects more frequently males than females (up to 3:1) 2 3.

The initial phase is a preclinical phase, known as “concealed disease”, which is characterized by minimal or no structural abnormalities, with or without minor ventricular arrhythmias 2 5.

Arrhythmogenic right ventricular cardiomyopathy typically becomes clinically apparent between the second and fourth decades of life 2 3. More rarely, symptoms and signs can appear before puberty or in the elderly3.

The most common clinical presentation consists of ventricular arrhythmias and related symptoms or events, such as, palpitations, syncopal episodes (mostly occurring during physical exercise), and cardiac arrest 5.

Sudden cardiac death may be the first clinical manifestation of the disease, especially in young people and competitive athletes with a previously undiagnosed arrhythmogenic right ventricular cardiomyopathy 2 5.

ARVC may occasionally simulate an acute myocarditis, characterized by chest pain, transient ST-segment and T wave changes. Besides, a rise cardiac biomarker values may be detected.

At present, there are no gold-standard tests or pathognomonic criteria to make a definitive diagnosis of ARVC 1 3.

The diagnostic criteria, originally put forward in 1994 7, have been revised in 2010 to improve diagnostic sensitivity, but with the important prerequisite of maintaining diagnostic specificity 3.

The 2010 Task Force Criteria 8 facilitate diagnosis with an emphasis on major (each scores 2 points) and minor (each scores 1 point) criteria that include 6 domains 1 4 8: 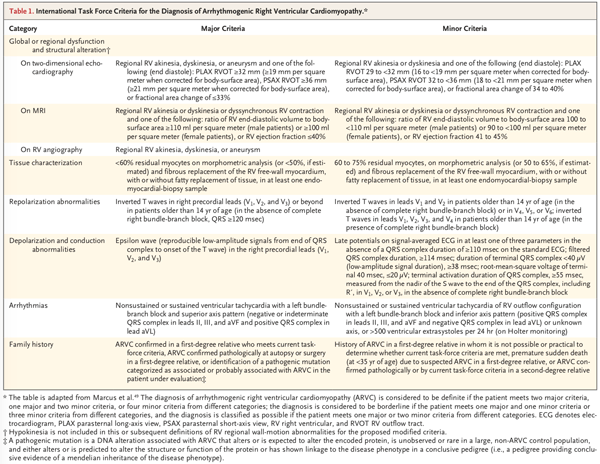 The diagnosis is possible if there are 2 points (1 major criterion, or 2 minor criteria) 1 8.

Although these criteria are more sensitive, they are difficult to robustly apply when used for screening family members and asymptomatic variant carriers and eliminating other possible diagnoses like myocarditis, sarcoidosis, dilated cardiomyopathy, Brugada syndrome, Uhl anomaly, Ebstein's anomaly, a left-to-right shunt, and pulmonary hypertension 1.

The electrocardiogram plays a key role in the diagnosis of ARVC 4.

Repolarization abnormalities are early and sensitive markers of disease expression in ARVC 8. One of the key features of ARVC is the presence of T wave inversion in right precordial leads in patients over 14 years of age, in absence of complete right bundle branch block 4 8.

T wave inversion in leads V1, V2, V3, and beyond in healthy individuals >14 years of age is observed in only 4% of healthy women and 1% of men. Therefore, it is reasonably specific and considered a major diagnostic abnormality in ARVC 8.

Epsilon wave is a small amplitude potencial that occur at the end of the QRS complex and at the beginning of the ST-segment detected in the right precordial leads 4.

Epsilon waves are recorded in patients with advanced disease 5.

The presence of more than 500 premature ventricular complexes in 24 hours is a minor criterion for the diagnosis of arrhythmogenic right ventricular cardiomyopathy 1 4 7.

Sustained ventricular arrhythmias may occurred in about 70% of the patients 6.

The most important goals of clinical management of patients with arrhythmogenic right ventricular cardiomyopathy comprise 3:

The 2017 AHA/ACC/HRS Guidelines for Management of Patients With Ventricular Arrhythmias and the Prevention of Sudden Cardiac Death 9 and the 2015 International Task Force Consensus Statement for Treatment of Arrhythmogenic Right Ventricular Cardiomyopathy/Dysplasia 10 recommend:

Patients with arrhythmogenic right ventricular cardiomyopathy have a significantly increased risk of sudden cardiac death during exertion 9 10. It is recommended that patients with a definite diagnosis of ARVD not participate in competitive and/or endurance sports and should avoid intensive exercise.

Beta blockers can be useful in asymptomatic patients with ARVC and no ventricular arrhythmias or ventricular dysfunction 9.

Heart transplantation is recommended as a final therapeutic option in ARVC patients with either severe, unresponsive congestive heart failure or recurrent episodes of VT/VF which are refractory to catheter ablation in experienced centres and/or ICD therapy 10.