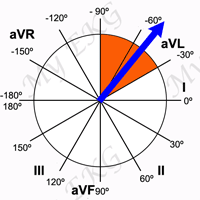 The situations in which left-axis deviation may be seen are as follows:

Note that the first three account for almost 90% of EKG tracings with left-axis deviation.

The mean QRS axis tends to shift leftward with increasing age. The leftward shift of the QRS axis with aging is particularly prevalent in overweight subjects and is more pronounced in older obese men than in older obese women 3.

There is an association between the QRS axis and body weight, overweight individuals tend to have a more leftward axis. Most obese patients without clinical heart disease have normal EKGs, with the mean QRS vector shifting to the left with increasing obesity 3.

In patients with left ventricular hypertrophy, QRS axis may be within normal (but between 0º and -30º) or deviated to the left 2.

It is common to find ST-segment depression and negative T waves in lateral leads (I, aVL, V5 or V6).

Signs of left atrium enlargement may be observed with wide P waves (P mitrale) in inferior and left precordial leads 2.

In left anterior fascicular block there is a delay in the activation of the anterior region of the left ventricle, which produces a marked left-axis deviation (QRS axis between -45° and -90°), without widening of QRS complex.

In left bundle branch block (LBBB), the QRS duration is greater than or equal to 120 ms in adults, there is broad notched or slurred R wave in leads I, aVL, V5 and V6.

The ST-segment and T waves are usually opposed to QRS direction.

The appearance of LBBB may change the mean QRS axis in the frontal plane to the right, to the left, or to a superior, in some cases in a rate-dependent manner 3.

Inferior wall myocardial infarction is another condition which may lead to abnormal left-axis deviation.

In an inferior myocardial infarction the initial QRS forces are directed superiorly, causing an abnormal Q wave in leads II, III, and aVF.

Inverted T waves in inferior leads (II, III, and aVF) may also be present in patients with inferior myocardial infarction.

Related article: Hyperkalemia on the EKG.

An elevation in the plasma potassium concentration >6.5 mEq/L will partially depolarize the cell membrane, producing disorders in the generation and transmission of the electrical stimulus.

Left-axis deviation that occur in hyperkalemia are due to a intra-venticular conduction delay, which causes a progressive widening of the QRS complex.

P wave also increases in duration and decreases in amplitude and, furthermore, other disorders may appear, such as AV blocks, sick sinus syndromes or junctional rhythms.

More information: Hyperkalemia on the EKG.

Lung hyperexpansion causes external compression of the heart and lowering of the diaphragm, with consequent elongation and vertical orientation of the heart.

In addition, the presence of increased air between the heart and recording electrodes reduces the amplitude of the QRS complexes in precordial leads.

Other Causes of Left Axis Deviation

Left-axis deviation may also be seen in high degrees of pre-excitation, during a ventricular tachycardia, in a paced rhythm 2, in expiration, pregnancy, ascites, etc.