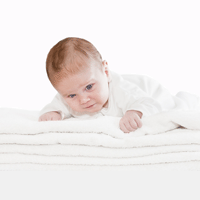 The electrocardiogram remains an important test for the diagnosis and evolution of congenital heart disease, arrhythmias or other heart conditions during childhood.

The basic principles of pediatric electrocardiogram are identical to those in adults, but in children, the EKG presents different features, conditioned by the patient's age.

In this article we give you all the tools for correct interpretation of a pediatric EKG and its differences with the adult electrocadiogram.

How to perform an Electrocardiogram to a child?

The electrocardiogram is performed in a child in the same way as adult EKG.

10 electrodes are placed in their usual positions, and should prevent the child from moving during EKG acquisition (this is the hard part).

Limb electrodes can be placed on the torso to reduce movement artifacts.

In newborns and infants must also make V3R and V4R (right-side leads) for a better study of the right ventricle.

When done, it should be reviewed before removing the electrodes, ensuring proper calibration and the absence of artifacts or poorly recorded Leads.

Differences between the Pediatric and Adult Electrocardiogram

The pediatric electrocardiogram has different features, these differences are more pronounced in newborns, and, as the patient grows, are varying through adolescence.

Electrocardiogram of a Newborn:

In newborns there is a predominance of the right ventricle to the left ventricle due to the fetal circulation.

On the EKG trace can be observed:

Heart axis: the QRS axis direction is moving toward normal values (between -30º and 90º).

Heart rate: as the child grows, heart rate decreases. In the healthy adult it is between 60 and 100 bpm.

T wave: T wave is positive in precordial leads in newborns, but after the first week of life becomes negative in leads V1-V3 and persists through adolescence and even, in young adults (juvenile T wave pattern).

For a correct analysis of pediatric EKG it is essential to know the age of the patient and also know the normal values of each age. 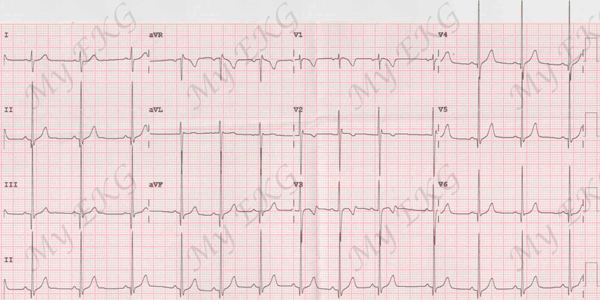 The following table shows the normal values for heart rate, heart axis, length of waves and intervals and amplitude of the R waves and S waves in leads V1 and V6 in each pediatric age range.

In children, is common to find changes in the electrocardiogram which are considered non-pathological disorder.

Supraventricular extrasystoles: presence of a narrow premature QRS. It may be preceded by ectopic P wave (atrial origin) or not (node origin). No pathological significance, but may cause symptoms.

RSR’ pattern in V1: the incomplete left bundle branch block is also often found in childhood and youth, in patients without heart disease. Although if it is accompanied by heart murmur, an atrial septal defect should be ruled out.

Early repolarization: concave ST segment elevation with terminal QRS slurring or notching (J wave). It is an EKG pattern most commonly seen in adolescents and young athletes. No pathological significance, although, it has been found to be associated with a modest increased risk of ventricular arrhythmias, in some recent studies (see early repolarization).