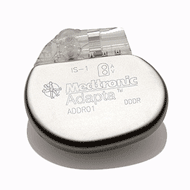 An electronic acemaker is a device that is surgically implanted to correct severe heart rhythm disturbances such as atrioventricular blocks or sick sinus syndrome 1.

The main purpose of a pacemaker is to maintain an adequate heart rate and ensure cardiac contraction.

An electronic pacemaker has two major components: the pulse generator (battery, processor, radiofrequency receiver, etc…) and the leads which they are inserted into the heart muscle.

Pacemakers may be single-chamber, dual chamber, biventricular. The most common sites of implantation are: right atrium, right ventricle and left ventricle (in the venous system).

The type of pacemaker depends on the disease causing the bradyarrhythmia and underlying conditions. Dual-chamber pacemakers are the most implanted, because they are indicated in sick sinus syndromes and in atrioventricular blocks 2.

Pacemakers on the Electrocardiogram

The pacemaker impulse is recognized on the electrocardiogram as a sharp, narrow spike. Its duration is generally less than 2 ms (half a small square), and it appears as a vertical line on the routine EKG. This spike is followed by a cardiac electrical activity (P wave if atrial pacing or QRS if ventricular pacing).

The combined efforts by the North American (NASPE) and British (BPEG) societies of pacing and electrophysiology have defined the international code (NBG) for the classification of the various pacing modes. The pacing modes are assigned a 5-letter code that describes their primary function.

The normal rhythm is observed on the electrocardiogram, without pacemaker spikes. This is a normal function of the pacemaker, it is often confused with a pacemakers malfunction.

A magnet may be applied to convert the pacemaker to the fixed-rate mode (VOO or DOO), and pacing can be examined 2.

The pacer impulse is followed by an abnormal QRS complex, the characteristics of which usually give a fairly good indication of the location of the stimulating electrode 1.

In many patients, with a typical complete LBBB pattern in the limb leads and right precordial leads there is a predominant negative deflection in leads V5 and V6.

In most cases of ventricular pacing, the tip of the electrode is located at the apex of the right ventricle. The apex-to-base sequence of depolarization results in negative QRS complexes in inferior leads II, III, and aVF.

If the site of stimulation is at the inflow or outflow tract of the right ventricle, the frontal plane QRS axis is usually normal.

If the site is located immediately below the pulmonary valve, the QRS axis becomes vertical or even rightward.

Read and Report an Electrocardiogram with Pacemaker

Read and inform an electrocardiogram of a patient with a pacemaker is much more complex than write: "pacemaker rhythm".

In the article How to read an EKG with pacemaker we describe how to do it.

Pacemaker Malfunction on the EKG

The electrocardiogram is the first medical tool to detect a pacemaker malfunction.

In the article pacemaker malfunction on the electrocardiogram we describe how to do it.