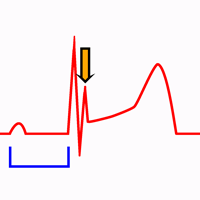 Hypothermia is defined as a core body temperature less than 35ºC or 95º F 1. It is usually caused by prolonged exposure to cold temperatures, but it may occur when people lie immobile on a cool surface or after very prolonged immersion in swimming-temperature water. Wet clothing and wind increase risk of hypothermia.

There are many electrocardiogram (EKG) manifestations of hypothermia. It is frequently associated with the appearance of a J wave (also called an Osborne wave) and with interval prolongation (PR, QRS, QT) 2.

Intense shivering occurs initially, which may cease as hypothermia progresses, below about 31°C 3.

As the temperature drops below 31°C, patients may develop slow, shallow breathing, people do not sense the cold, lethargy and clumsiness are followed by confusion, irritability, sometimes hallucinations, and eventually coma. Pupils may become unreactive 3.

Slowing of the heart rate, initially, sinus bradycardia is followed by slow atrial fibrillation; the terminal rhythm is ventricular fibrillation or asystole 3.

Hypothermia is frequently associated with the appearance of a J wave (also called an Osborne wave) 2.

J wave is a slow upright deflection between the end of the QRS complex and the early portion of the ST-segment. They are most commonly observed in leads II, III, aVF, V5, and V6 2.

ST segment elevation is often reported in conjunction with J waves. If it occurs anteriorly, it can resemble the Brugada pattern, and may result from early repolarization.

Hypothermia is associated with various atrial and ventricular arrhythmias.

More than 50% of patients with moderate hypothermia develop atrial fibrillation with a slow ventricular response, but it usually subsided during rewarming 1 2.

With further progression of hypothermia (<25°C or 79°F), the risk of asystole increases significantly.

Increasing levels of hypothermia result in progressive prolongation of the cardiac conduction.

Delayed AV conduction results in prolongation of the PR interval, and various degrees of AV block may occur.

Other EKG abnormalities seen in hypothermia include muscle tremor due to patient shiverin.

The first priority is to prevent further heat loss by removing wet clothing and insulating the patient.

Passive rewarming is generally adequate for patients with mild hypothermia. Layered protection with blankets, several coats or jackets, sheets or towels, is recommended.

Passive rewarming alone will be inadequate for these patients.

Severe hypothermia is associated with marked depression of critical body functions, which may make the victim appear clinically dead during the initial assessment. Therefore, lifesaving procedures should be initiated unless the victim is obviously dead 5.

The victim should be transported as soon as possible to a center where aggressive rewarming during resuscitation is possible 5.

For patients with severe hypothermia with a perfusing rhythm some have reported successful rewarming with active external warming techniques.

Patients with severe hypothermia and cardiac arrest can be rewarmed most rapidly with cardiopulmonary bypass. Alternative effective core rewarming techniques include warm-water lavage of the thoracic cavity and extracorporeal blood warming with partial bypass 5.

Adjunctive core rewarming techniques include warmed IV or intraosseous fluids and warm humidified oxygen. Heat transfer with these measures is not rapid, and should be considered supplementary to active warming techniques.

Do not delay urgent procedures such as airway management and insertion of vascular catheters. If ventricular tachycardia or ventricular fibrillation is present, defibrillation should be attempted.

Because severe hypothermia is frequently preceded by other disorders (eg, drug overdose, alcohol use, or trauma), the clinician must look for and treat these underlying conditions while simultaneously treating hypothermia.