Right Ventricular Hypertrophy on the Electrocardiogram 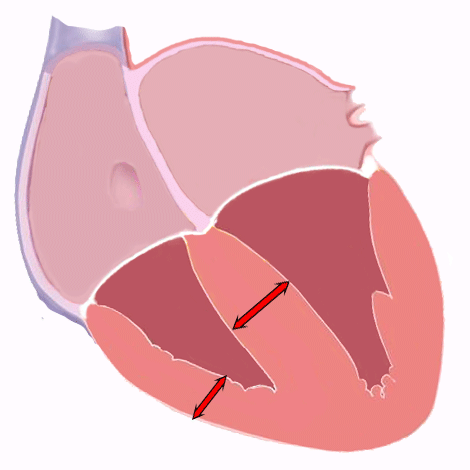 RVH may be caused by different conditions which increase right ventricle afterload, and it is associated with significant morbidity and mortality 1.

There are recommended electrocardiographic criteria for RVH 2 3, which could provide a non-invasive, well-tolerated and inexpensive method of screening, but this criteria have unclear accuracy in a patients without known cardiovascular disease 1.

Right ventricular hypertrophy causes a displacement of the QRS vector toward the right and anteriorly and often causes a delay in the R wave peak in right precordial leads 3.

Electrocardiographic RVH, particularly in congenital heart disease, has often been classified on the basis of two EKG patterns 2 3.

The typical RVH pattern is a mirror image of the left ventricular hypertrophy pattern.

This pattern is most frequently due to factors other than RVH.

It can signify hypertrophy, dilation, or overload of the right ventricle, perhaps most commonly in mitral valve disease with pulmonary hypertension and atrial septal defect.

In patients with pulmonic valvular stenosis, the R’ voltage correlates with the severity of stenosis 2.

Both patterns are associated with right-axis deviation.

Both are also frequently associated with ST depression and T wave inversion in right precordial leads; as with left ventricular hypertrophy, these ST-T abnormalities are better referred to as “secondary ST-T abnormality” than as “strain” 3.

Right-axis deviation and prominent anterior forces in the right precordial leads should be required for the electrocardiographic diagnosis of RVH in nearly all cases.

On the other hand, such features occur for various reasons other than RVH, including a not-infrequent normal variant 3.

This pattern includes low voltage in the limb leads; a frontal plane QRS axis that is rightward, superior, or indeterminate; a rightward P wave axis (ie, greater than 60 degrees); persistent S waves in all precordial leads; and low R wave amplitude in V6.

Right ventricular hypertrophy is suggested, in the presence of the chronic obstructive pulmonary disease pattern, only if R wave amplitude in V1 is relatively increased 3.

Therefore when an EKG is interpreted as showing right ventricular hypertrophy in this age group, the message to be conveyed is that the hypertrophy pattern is abnormal in comparison to that in normal patients of the same age 3.

Although the sensitivity of the electrocardiographic criteria for right ventricular hypertrophy is generally low, some criteria have high specificity and can be used to advantage in diagnostic schemes or to derive continuous variables.

Numerous criteria mostly derived from the amplitude of R and S waves in leads I, V1, V6, and the R wave peak time in V1 have been proposed.